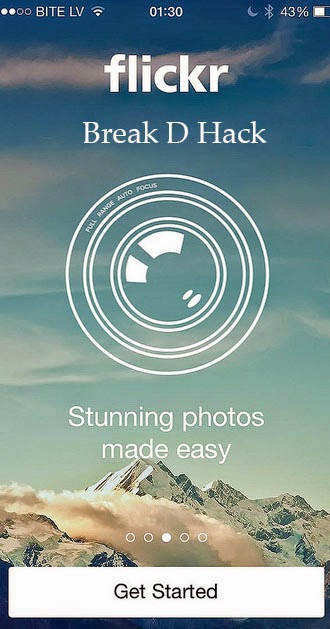 Yahoo has released the next iteration of  its own photo and video sharing app Flickr 3.0, flickr is used by many people around the world to share their photos and videos, this updates app has been made possible after the redesign of the flickr website few day back. The world is that the app has so many added features to it, flickr now gives the user 1 tera byte storage to have their photos for a single account and it has a all new UI.
The new version of flickr has improved its UI is a lot of ways and has 14 filters which ca be used to edit their pictures and as well as an 30 second HD video. They claim that with the new app we will be able to capture and share photos and videos so easily, the user can now even discover photos and videos faster than before, the search that took around 3 seconds is now just 30 millisecond. They also say that the new interface will allow easy sharing and uploading.
Also Read This : Facebook is Developing An Anonymity App
Some of the great new features of the new iteration of flickr is that we can store around 1 tera byte of photos and videos in it, then there is this important feature that helps the user to edit the photos in batch and combine them in to a single album, this will certainly help users who like to be organised. The redesign will help us to share all the photos is spaces like Facebook, Twitter and Pinterest. The app is available in both Play store and the App store.
Posted by Divakar
Labels: App
Email ThisBlogThis!Share to TwitterShare to FacebookShare to Pinterest
at 2:23 am