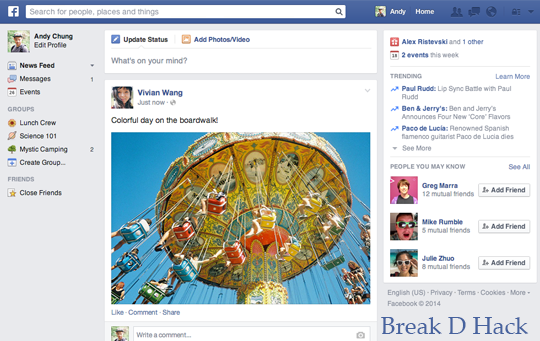 Facebook the most used social networking site in the world has changed its design and layout this month, the new design is surely a good one and most people like it, but the question here is why did they change it. Early 2013 Facebook was testing some new design features with a select group, and after the test the whole design which was tested was dumped, why was that what had happened.

Some of the UX designers claim that that 2013 design had a sense of mobile like content viewing in it with larger images and the news feed had more information in it than what we had and have now. This lead all the users just to use the news feed and not scroll through the whole wall for checking their friends activity, adding to this the feeds had a option of categorising the feeds which made it even more easy for people to go through the activity. This hugely affected the time people spent time in Facebook and had a adverse effect in the advertisement revenue.

Sure this could have happened but a Facebook employee in their blog post had said the above claims were assumptions and redesigning had nothing to do with the Ad revenue. In-fact the revenue was just fine with new design but many people in the test group had old 10 inch Netbooks which made the site look smudged and they had to scroll the page from left to right which made them frustrated, This was one of the major issue that we had to let down that design.

The 2014 design is okay for me i don't have any problems with it, i spend more time in Facebook and i am happy about the change. Hope we get better experiences from them every time.
Posted by Divakar
Labels: Facebook, Web
Email ThisBlogThis!Share to TwitterShare to FacebookShare to Pinterest
at 1:13 am